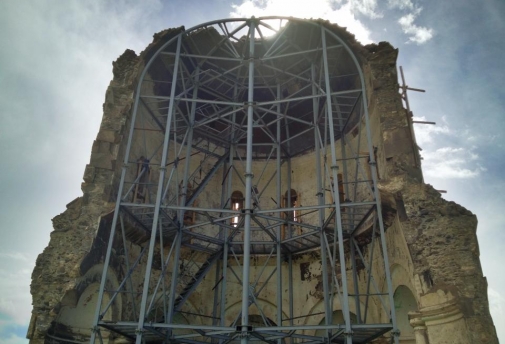 Architectural Consultancy and Project Management services for the Historic Preservation Project of the Church of the Holy Saviour (Surb Amenap’rkich, 1035)

Church of the Surp Amenap'rkich was built in 1035 to house a piece of the ture cross by Prince Abulgharip Pahluvani. A zhamatun was added in 1193 for the accommodation of the pilgrims, and a bell tower was erected in 1271 next to the main entrance. An earthquake damage to the church is reported first time in 1131. Its dome has been restored in 1342 following the disastrous earthquake in 1319.  When Nikolai Yakovlevich Marr and his team started the first scientific excavations in Ani from 1892 to 1917 the church was still standing, but was in a weakened condition. In 1912 they restored the walls of the church to prevent a total collapse. Nonetheless the eastern half of the church collapsed completely in 1957.

In 2010 World Monuments Fund and Ministry of Culture and Tourism signed a Memorandum for the conservation of Prikitch church. Works began in 2012 with assistance from the U.S. Ambassadors Fund for Cultural Preservation, U.S. Department of State and Embassy of the United States, Ankara. Conservation works include; design and installation of an interior scaffolding for the security of the workers, security fence, protective shelters for the relocated fragments, cataloguing and documenting the collapsed building remains; oversight and supervision of the archaeological excavations, emergency stabilization works; consultancy on structural health monitoring, construction materials analysis; utilization of laser scanning data, and final stabilization works.